Day 17 and 18. Yellowknife and Fort Smith

We have quite a big road map for today – half a dozen wheels-up airshows for communities around Yellowknife. Ken Fowler with the Rocket and Jim Hrymack with the Harvard faster and longer-range planes) take the Eastern route, Ross Granley with the Yak 155, Tanya with the Nanchang and myself with the citabria go North.

Until about 10 years ago, Nanchang was the primary Chinese military trainer aircraft. It looks like a fairly old warbird, but this one was built only in 1983. They are robust and capable, but were intentionally designed with small fuel tanks: so that the Chinese student pilots would run out of fuel and crash within the Chinese borders before they get a chance to defect. So we are now sure that Tanya will not leave the CAAT for the same reason :)

We get ready by the Buffalo’s hangar.

Weather in Yellowknife is decent, but to the North scattered clouds soon turn into broken. 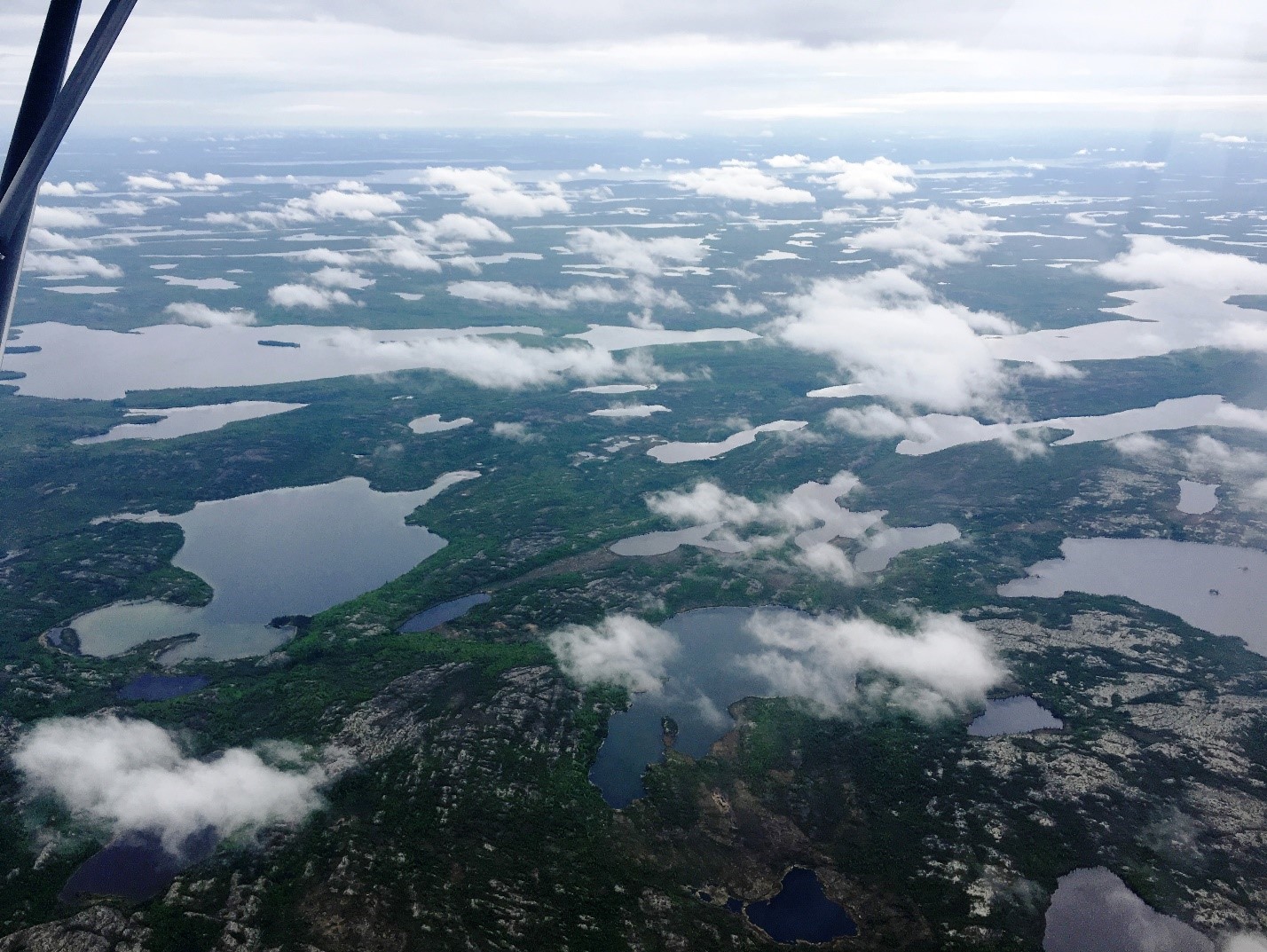 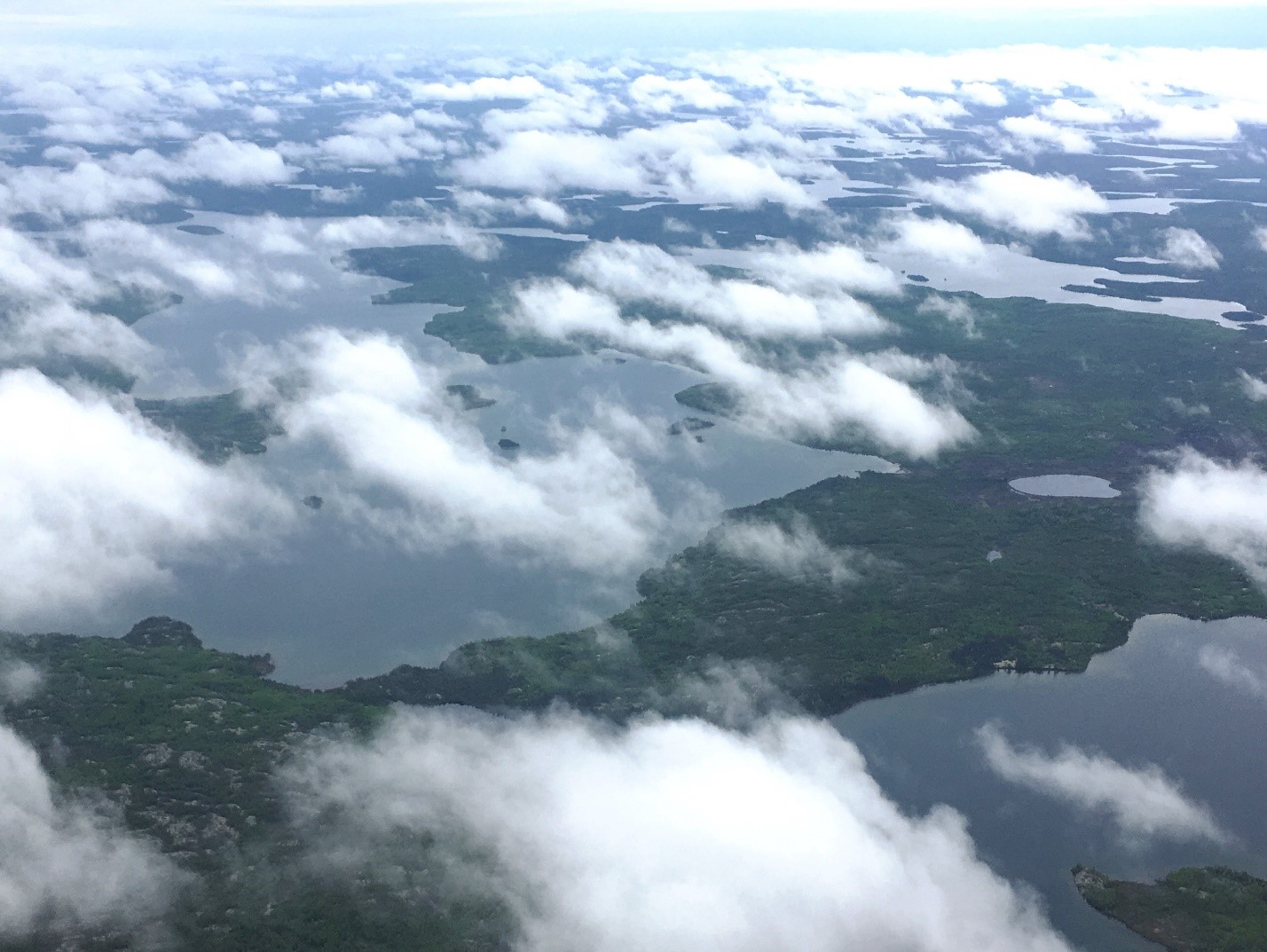 And facing a wall of clouds, we unfortunately had to turn around. This is actually the first airshow we were not able to do due to weather on the scheduled day. In Fort Liard, our first airshow, the elder was singing a prayer for the Canadian Arctic Aviation Tour, our safety and the weather – and “cut the cloud” with a knife. Since then, despite some weather in the area and total IFR days before and after, we had the skies opening up for CAAT airshows every single time for every single community. And even today, this is an airshow that will be flown in a couple of days on our way to Kugluktuk. 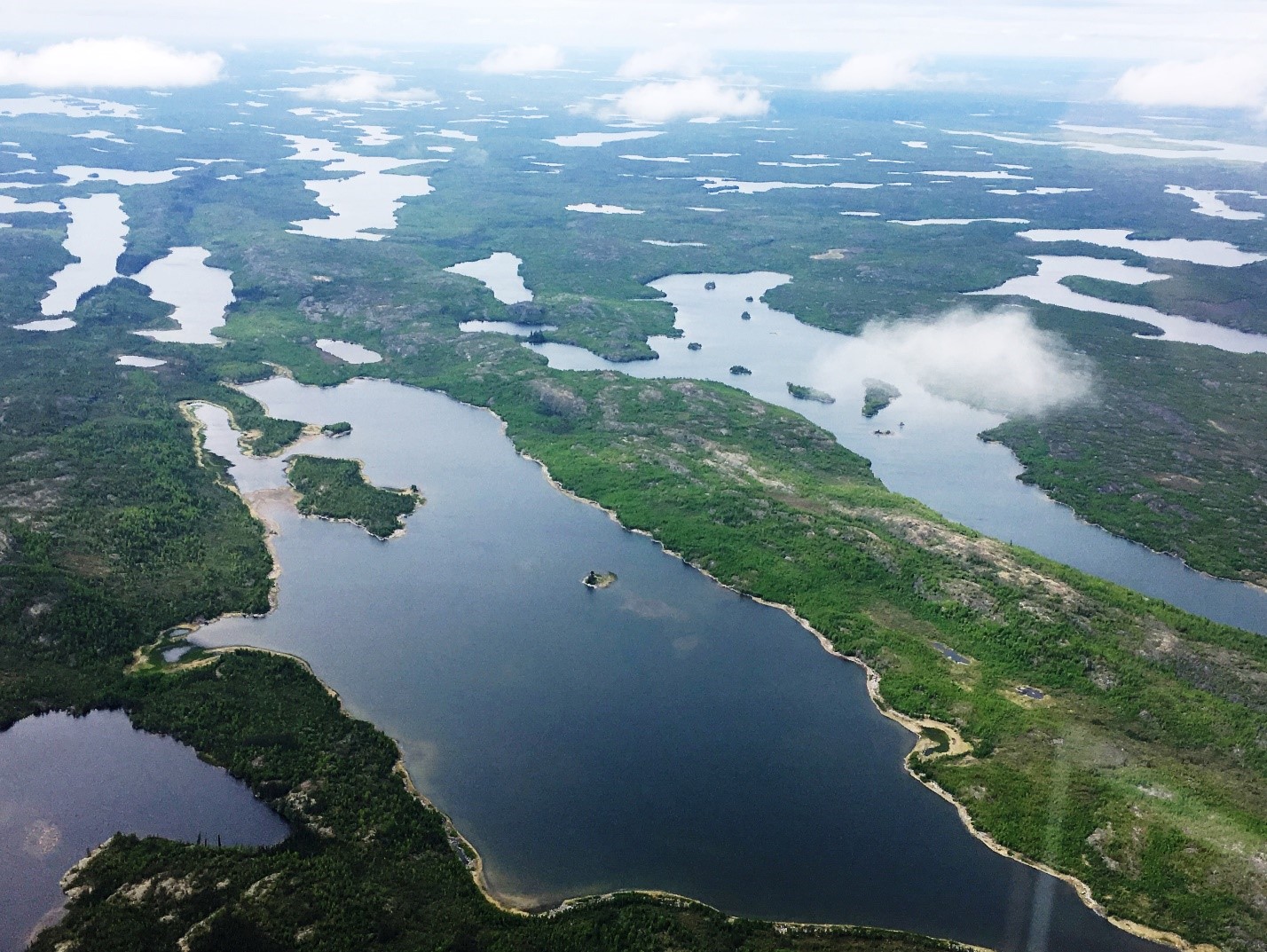 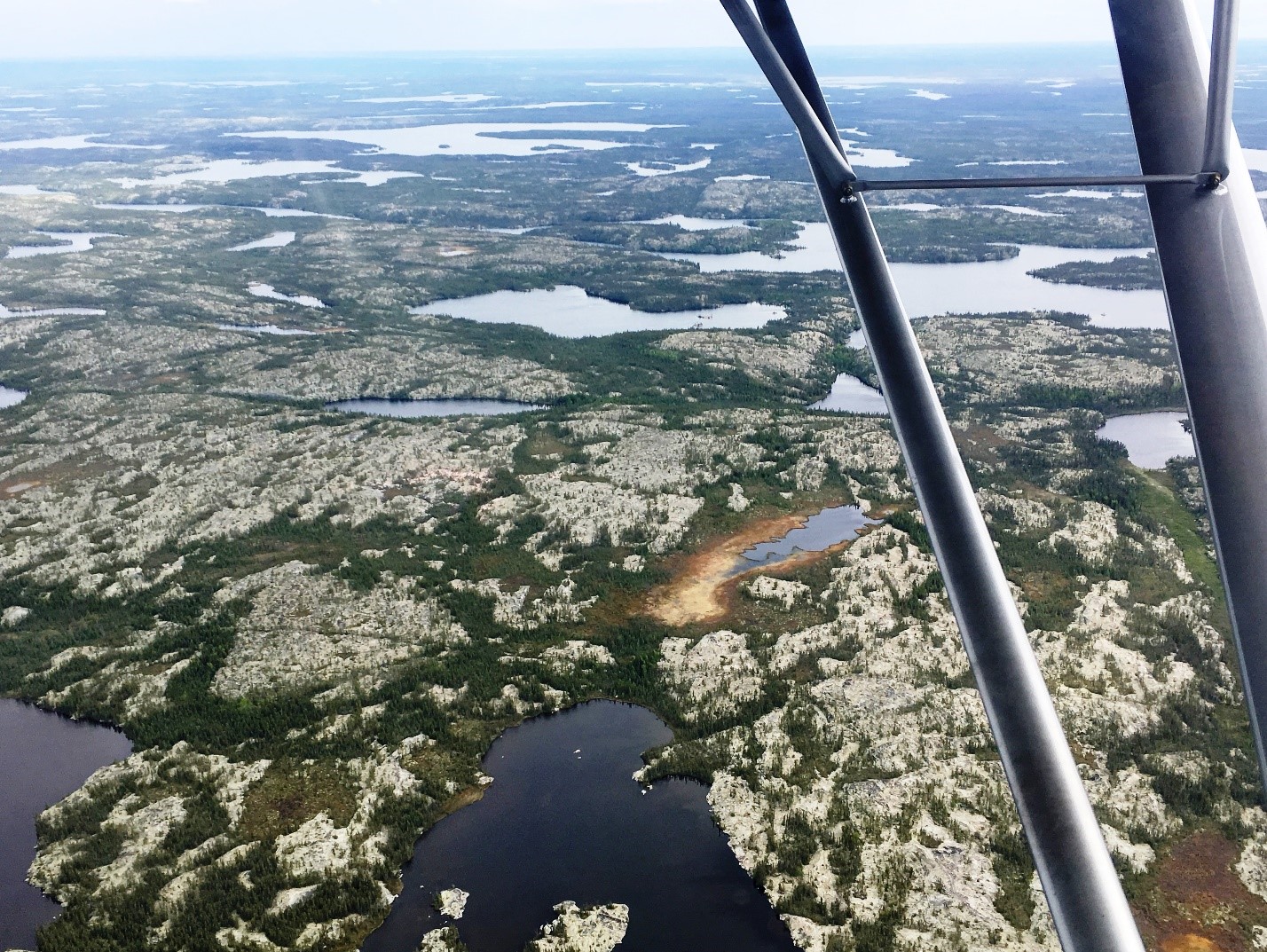 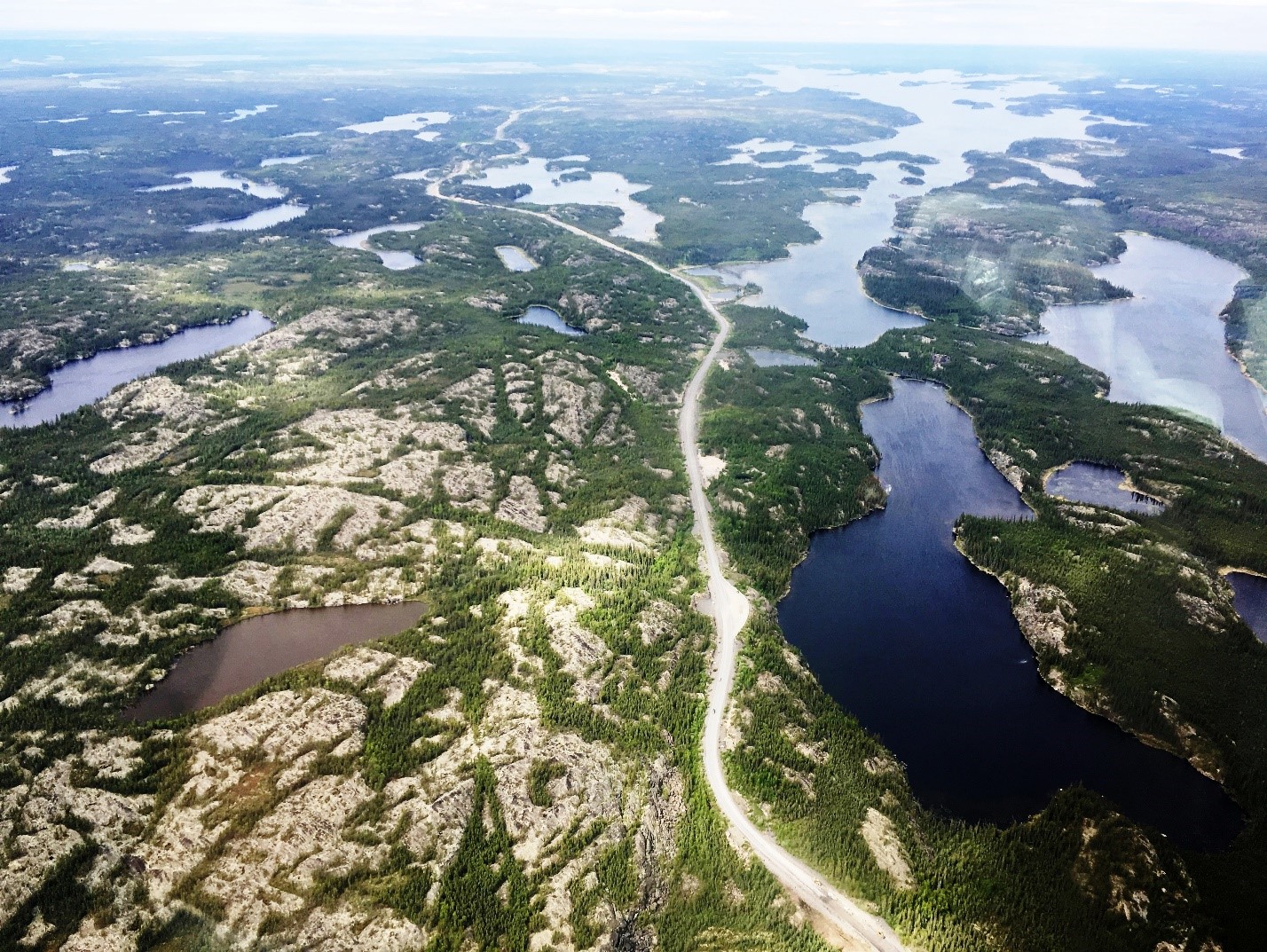 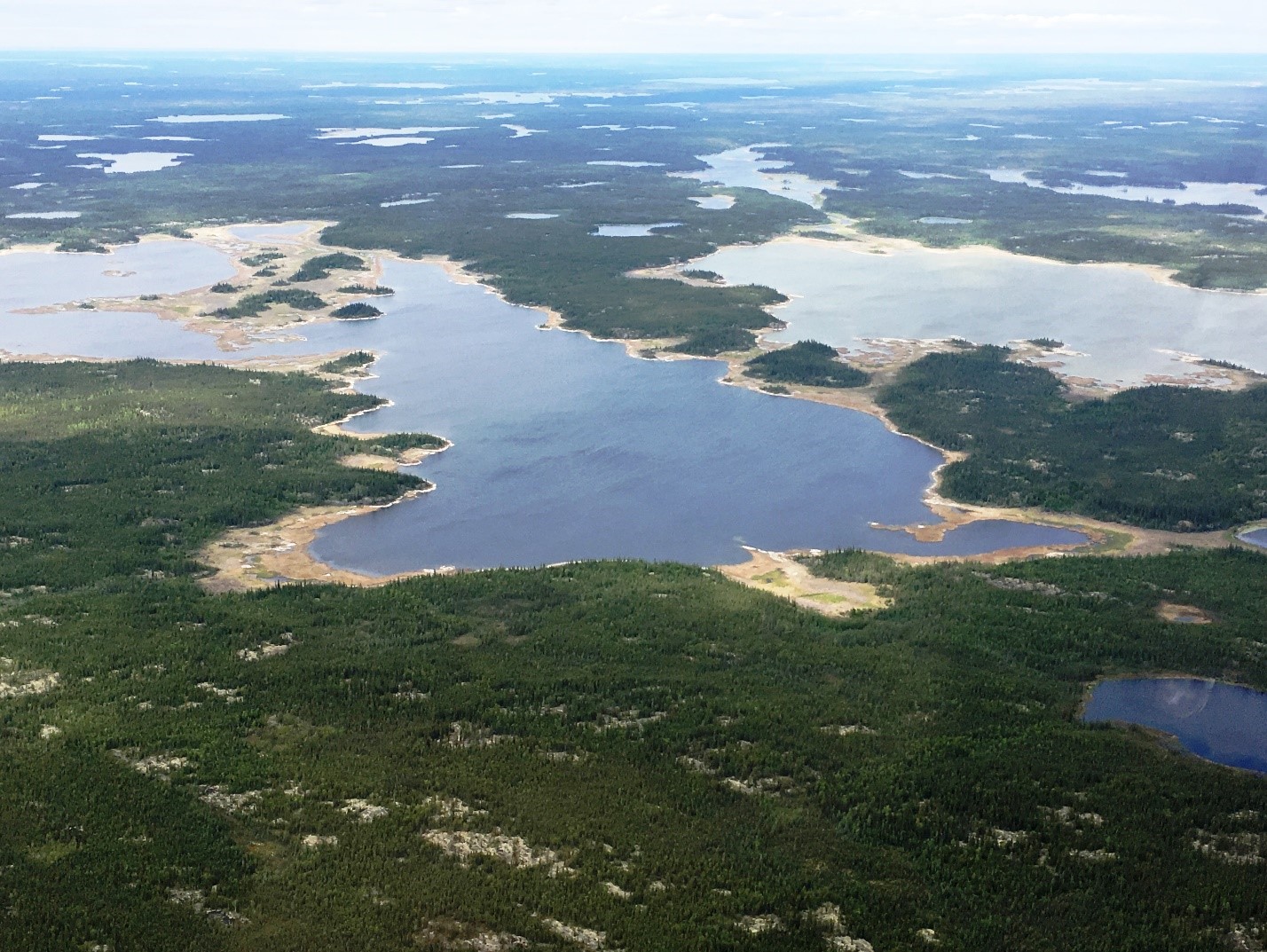 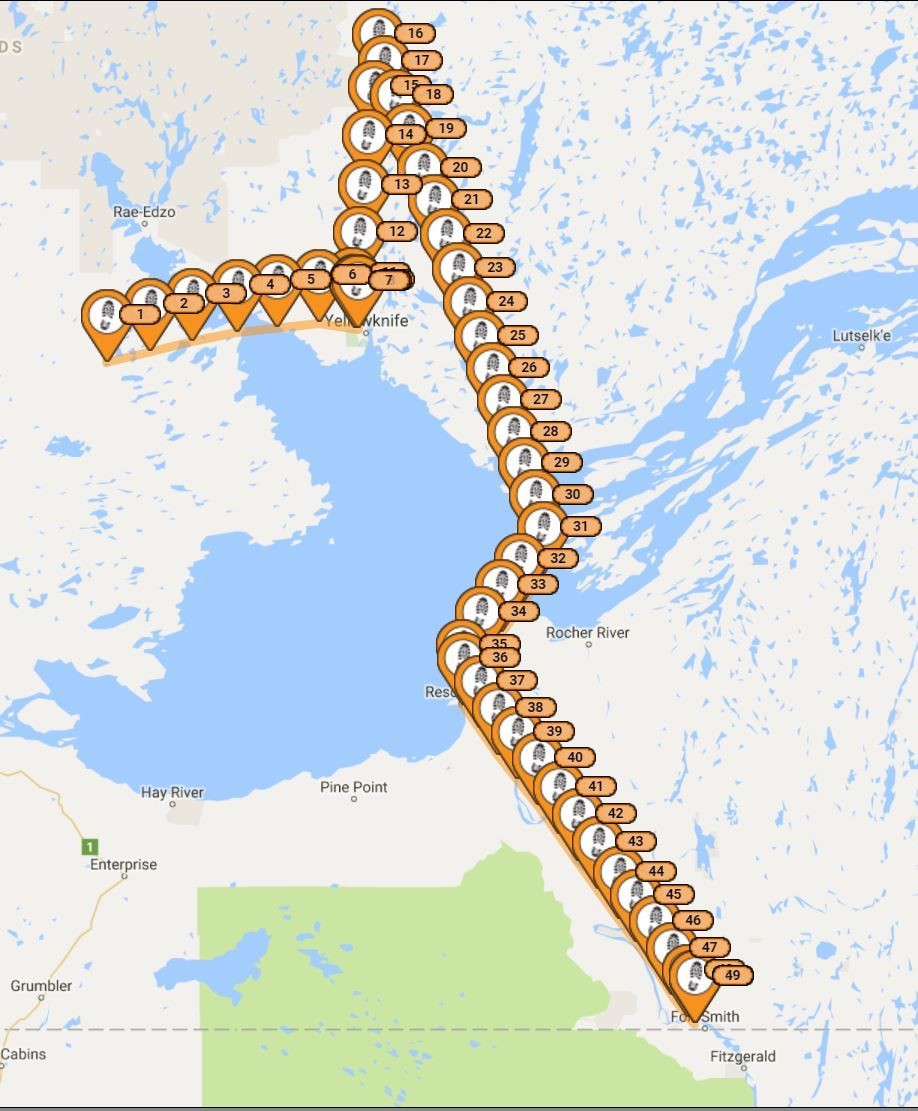 Going South we only had a few raindrops on the way, so carried on with the scheduled airshows. For wheels-up shows we had to leave the exact timing open, because weather is an unknown, incl. en-route winds. Aircraft fly at different speeds and we have to do multiple airshows in one flight. On the other hand, most of these communities have their own local event on the same day, so we communicate with them to tie the two together, and make the most from the air and the ground for the people living in there. 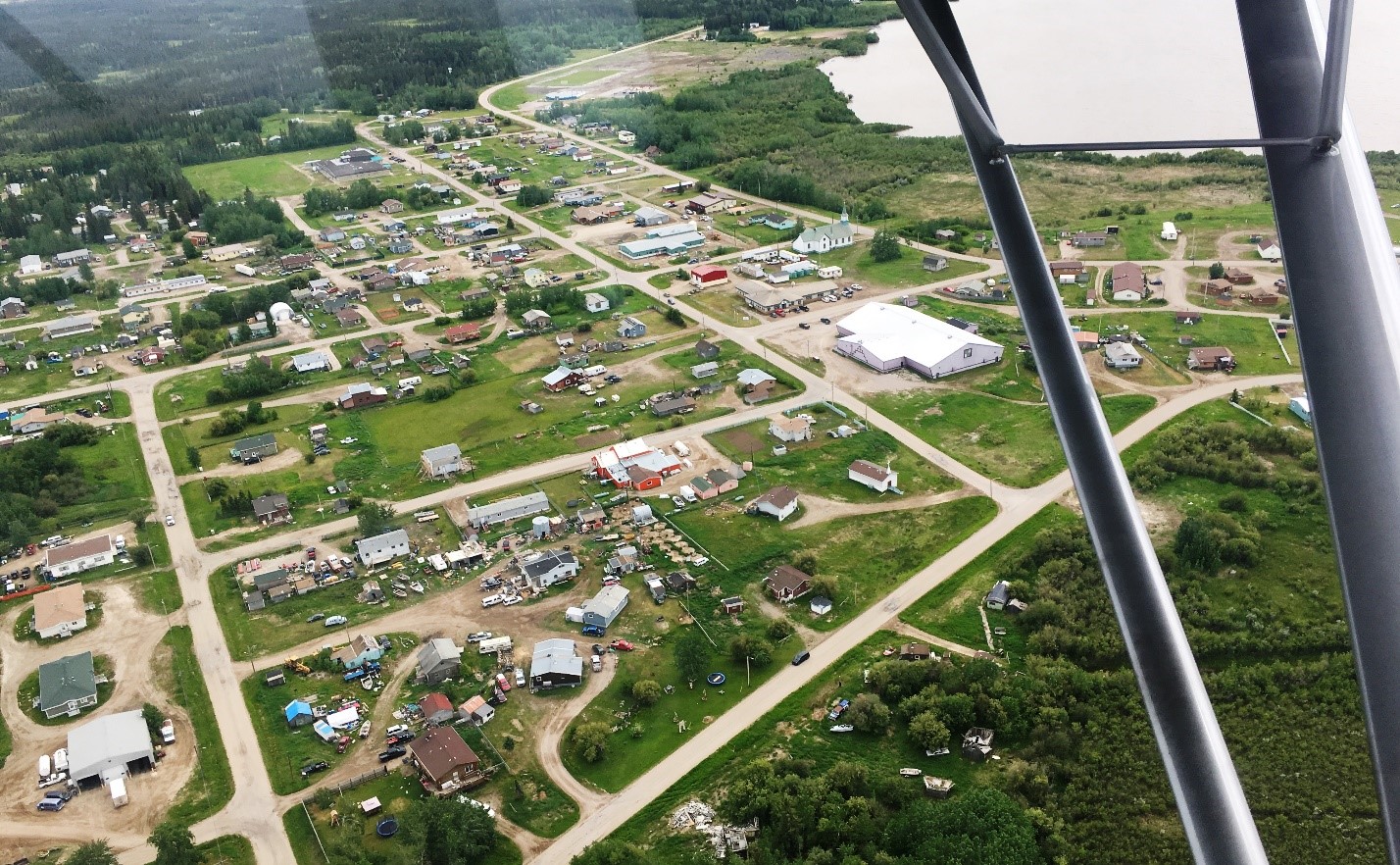 Fort Smith, with 3000 people living in town, is the 4th biggest town in the Northwest Territories – after Yellowknife (appx. 18000), Hay River (appx. 3500) and Inuvik (appx. 3200 people). About 70% of Fort Smith population is First Nations speaking Chipewyan, Cree and Michif.

I believe many Canadians still see the native people of the North as all the same. Nothing can be further from the truth. Gwitch’in and Inuit are just examples. Inuvialuit (part of the Inuit group) means “real people”. We have encountered some more “modern” variations too – when a Newfoundland husband of an Inuvialuit woman introduced himself to us as “Newfialuit” LOL.

The languages and writing are very different too. Some dialects never had a written version, and were passed verbally from generation to generation. Later, when European descendants came in these areas, the natives adopted Latin alphabet to transcribe their language. On the other hand, Inuit language, Inuktitut, has a very interesting writing. And even with my experience of learning the languages, I don’t know if I would be up for this challenge! 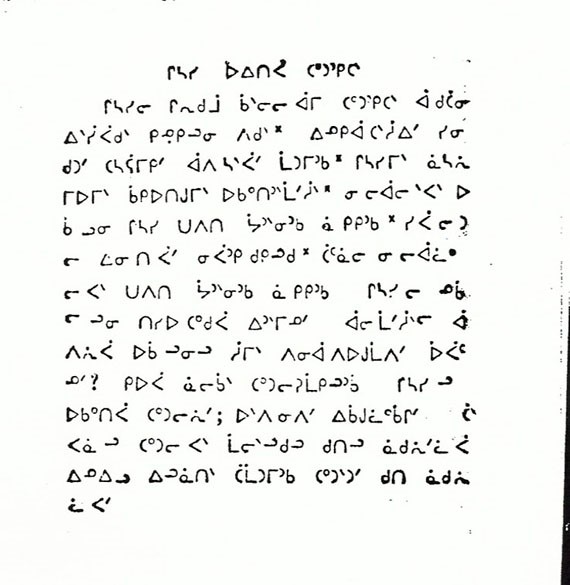 Despite the fact that we are celebrating this year Canada’s 150th birthday, native people of Canada were here centuries ago. There are signs of Vikings having landed on the Northern Atlantic Coast of Canada up to 1000 years ago. Alaska was not always separated from Russian Kamchatka by water – it is believed that a small group of people crossed the land bridge (or actually the “ice bridge”) several thousand years ago from Siberia. Chinese landed on the Pacific Coast of Canada in the late 1770s. The First Nations and the Chinese even understood each other’s spoken language reasonably well – they were speaking a mix of Aboriginal, Cantonese and a hybrid language Chinook. 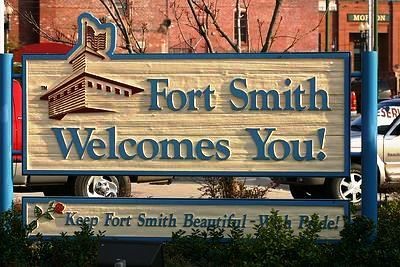 Fort Smith welcomed us with some sporty winds on landing. Brian from Northwestern Air was very kind to look after the planes, incl. hangarage – a luxury that we have not seen in a very long time. Combined with a paved runway, Fort Smith felt very upscale in comparison with our recent experiences.

Brian, together with his father Terry, is an owner of the Northwest Air. Terry founded it in 1965, and today the company serves the air connection of the community both to the North to Yellowknife and Hay River, and to the South – Edmonton, Fort McMurray, High Level and Fort Chipewyan 5-6 times per week with JetStreams. 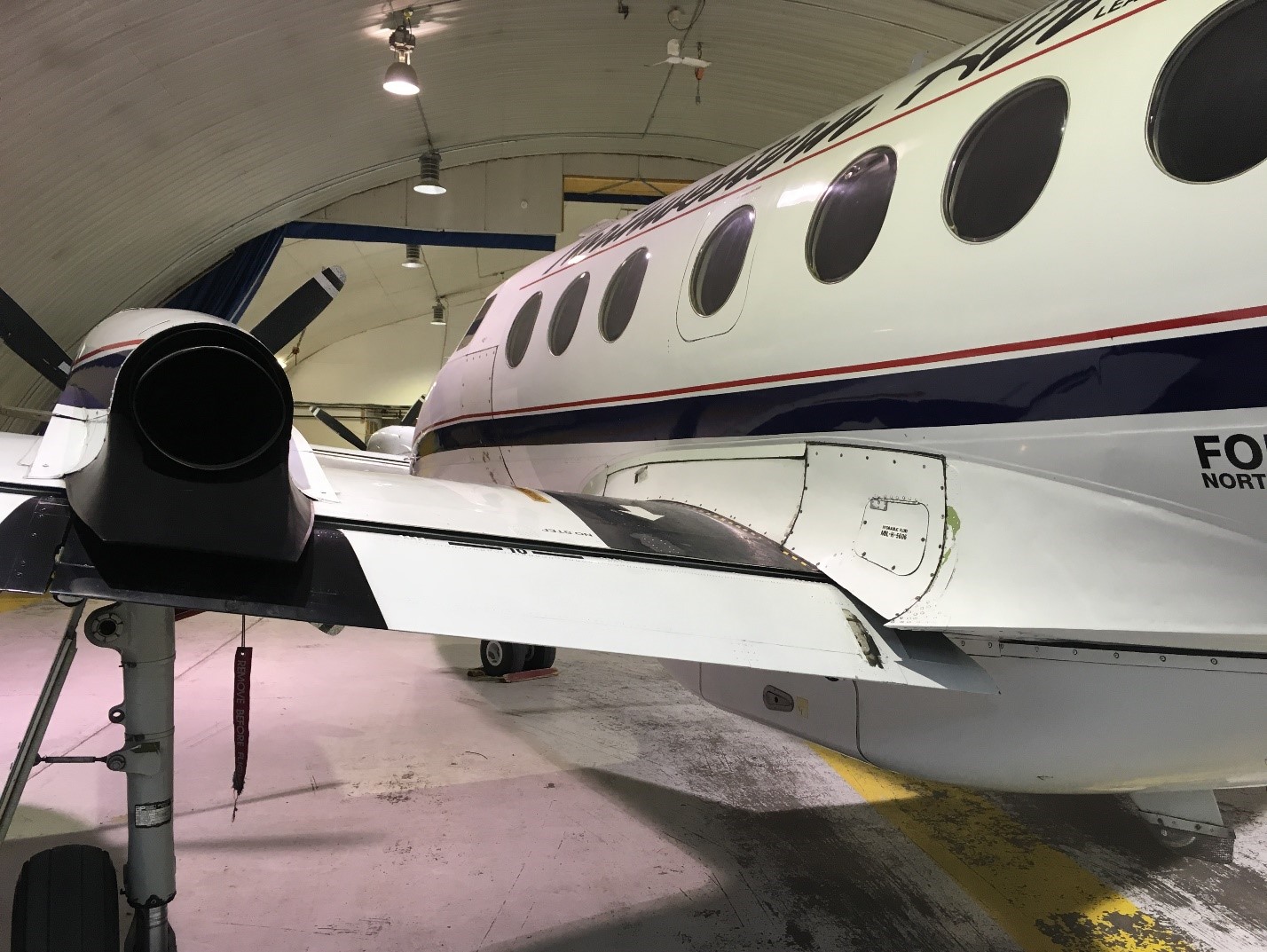 If you are a new commercial pilot (min 250 hours and IATRA required) and looking for a job, I encourage you to contact the company (www.nwal.ca). Most new employees here start on the ramp and the office. We’ve met two of them while putting our planes away for the night. One of them was a bright motivated young lady pilot. It’s the matter of a few months now that these new hires find themselves in the right seat of a turboprop aircraft – with the training provided by the company! An operation like this is an awesome way to start your pilot career, and – who knows! – you might like it up here in the North more than you think!

In the evening, we headed for the local museum, where everyone from the town could meet pilots, hear the story of the Arctic Tour, ask questions and hopefully get inspired. The time with the local public – young and old – was very casual and interactive. We’ve received many questions about the Arctic Tour, the aircraft, aerobatics, aviation careers etc. The museum director shared with us that the community did not manage to get any government support or funding for the celebration of Canada’s 150th birthday, so the Canadian Arctic Aviation Tour was their celebration, the event – with the whole community excited about it! 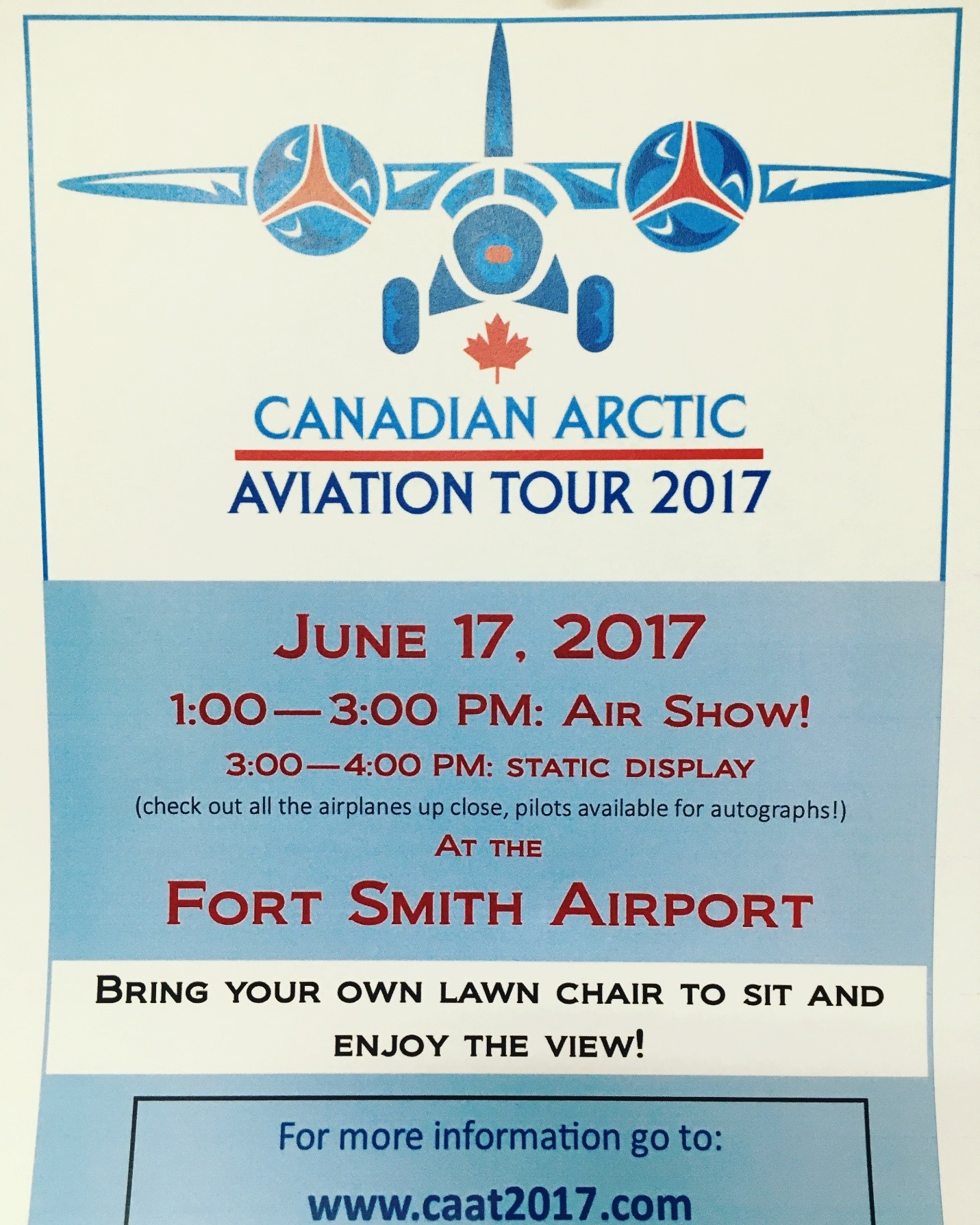 It is also the show where there are some “crew changes” happening. Brent Handy flew in from Cold Lake for this show. Watson brothers (“Yellow Thunder”) start their part of the CAAT here in Fort Smith. Out of the non-performers part of the team, since our announcer Gavin had to leave for a family emergency, Nancy McClure, the president of the CAAT, discovered a new for her airshow announcing career (despite what she says, he is doing a pretty good job!). Helen Towne, our “mama bear” returned home to Alberta from Yellowknife, and the volunteer Carolyn took her place. Carolyn’s background is psychiatry, so now the CAAT team gets its own shrink on the road too. Carolyn still believes she can organize and whip the pilots in shape LOL. Helen chuckled: it has been so far just “herding cats”. Actually “herding CAAT cats”. 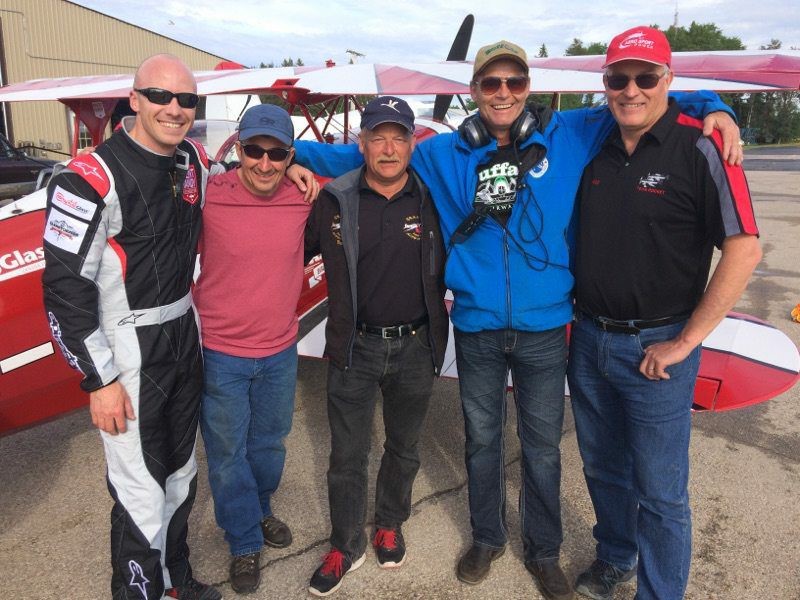 Despite the hopes, the next morning was a waiting game. We briefed the extraction crew and got aircraft ready. The radar images were promising good weather “in just a little bit”, but it was not coming soon enough.

To entertain the public, we put some music on, and Jimmy buzzed the surroundings in his Harvard as a “weather check”. The most surprising thing, it seems that people would have stayed under the rain regardless. Some just ran back home for warmer and dryer clothes, but were back shortly.

Unlike many big events that just “come to town” and announce it, Canadian Arctic Aviation Tour approached beforehand every single community North of 60th with two questions: “Can we bring you an airshow?”. We did not tell them, we asked for permission. The answer invariably was YES every single time. Then the next question was “How can we make it YOUR airshow?”. Options varied, but we adapted and found a way every single time. Therefore now it is very special not to just be strangers and travelers in town, but every time join a local team putting OUR airshow together – and have the excited community support us.

With a 3 hour delay, we finally started the show. The first couple of acts still had to a fly a “low show” (we had 2 ACEs amongst performers watching, so no fooling around!). And the really good weather came soon after. 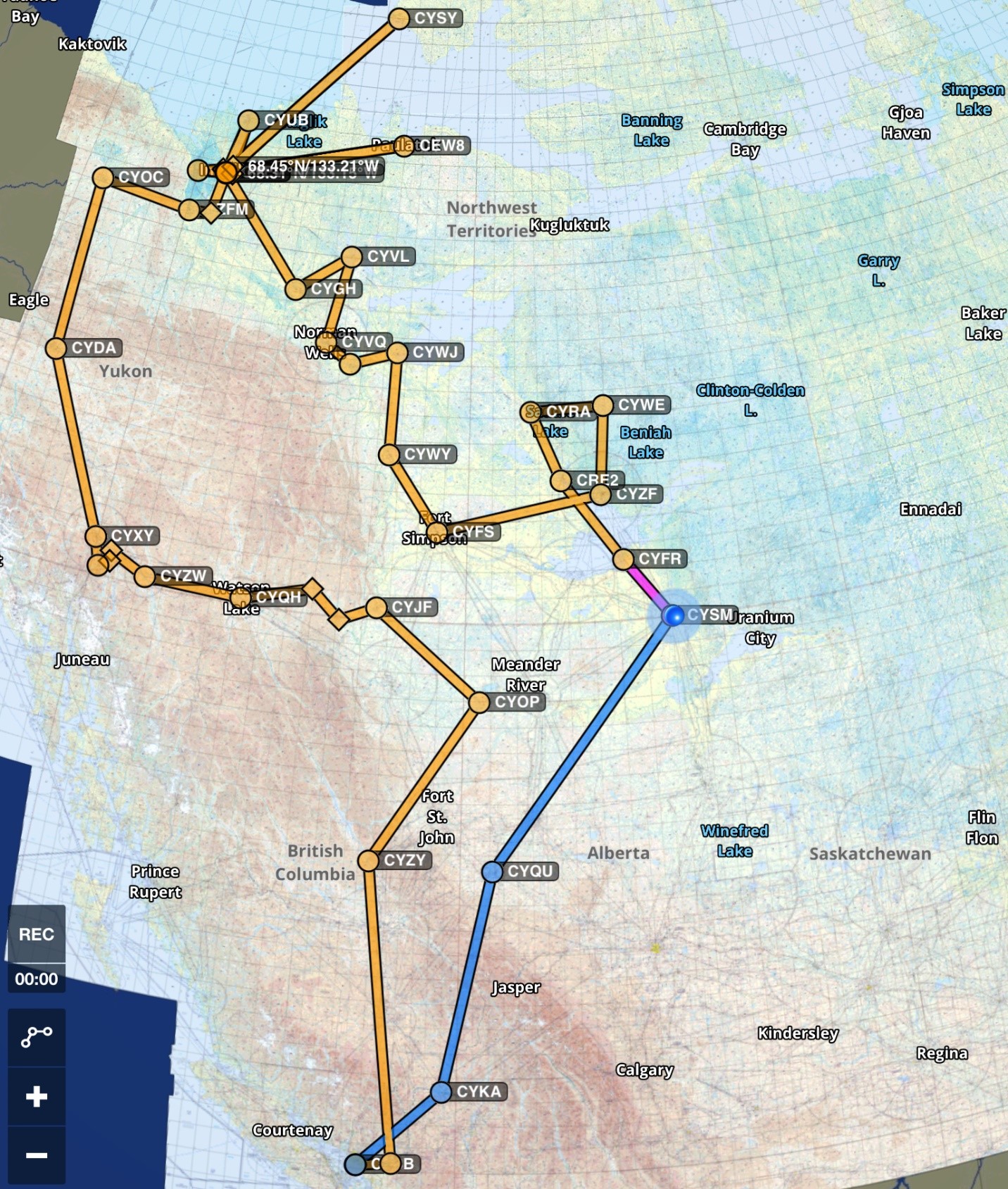