The North is Calling

Aviation unites people every day regardless of whether it’s a small aircraft or a large jet. With that said, there is nothing more natural than using aviation to unite the entire nation during this very special year where we commemorate Canada’s 150th anniversary. It is from that sentiment the Canadian Arctic Aviation Tour was born, to bring celebration to remote communities across Canada’s Arctic, many of which can only be accessed by flight. 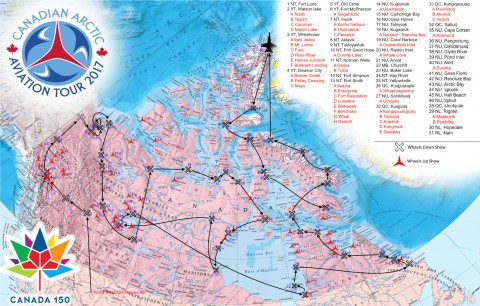 The #ArcticTour150 is a unique air show event. In fact, it is a sequence of almost 100 events - 97 air shows across Canada’s Arctic to be precise (yes, it’s not a typo – NINETY SEVEN AIR SHOWS!). What’s more important – the Tour will bring the cutting edge of precision aerobatic flying to areas that have only known aviation as a means of survival, not entertainment.  EVERYBODY will have a chance to join Canada’s birthday!

In addition to the air shows, this tour offers a large educational component. Many locations along the more than 19,000 miles route are aboriginal communities. Using attention generated through the tour, we hope to educate the rest of Canada about the life, culture and struggles of our indigenous communities, and share their unique experiences. I believe the native culture is rich, fascinating and not known enough. From the art, to the music and food – we will share with you as much as we can through social media as the journey progresses.

Each community we visit is aware of the tour and are planning events of their own to complement our visit. From a music festival, to arts shows, to village barbecues, our performances will be enhanced by the engagement thecommunity themselves contributing to the event. Even as I write thisI get goose bumps just thinking of the scope of what we are about to do. It is truly EPIC!

Why an aviation tour? Northerners have seen planes before, airplanes are actually an integral part of life in the North-a lifeline for  food, medical supplies, transportation and technology. Yet most of them have never seen an air show in their life. Seeing something they know–an airplane–in a totally new upside-down perspective, with amix of technology, skill and hard work, we expect it to be an inspiration. Inspiration to not necessarily become an aerobatic pilot, but to be a better, stronger, smarter and braver version of themselves, the best they can be. We hope that youth in these communities will learn nothing else but themselves will be able to stop them from achieving their dreams. We hope to show them, not just through flying, but through a real connection that the possibilities exist and that hard work pays off. The sky is NOT the limit!

I feel particularly privileged being the only Canadian female aerobatic performer on the tour and I hope to inspire young girls to push the limits and pursue their dreams. Changing stereotypes is not easy, and I pray that there will be enough girls encouraged and empowered by the end of this summer who will in turn, make a difference in their lives. Butterfly effect.

Who is making this epic event a reality? The amazing brains and hearts behind #ArcticTour150 are the organizers of Alberta’s Rocky Mountain House Air Show: Nancy McClure, Wendy Fowler, Ken Fowler, Indira Thackorie and the team. When I signed up for the entire tour a friend of mine asked, “Who are the producers? Have they ever done anything like this before?” The truth is, NOBODY HAS EVER DONE ANYTHING LIKE THIS BEFORE! This is what makes this initiative unique, audacious, inspiring and – yes! – a little crazy.

The #ArcticTour150 requires a lot of support from various companies, sponsors, government and the Canadian military. Everything from flying in fuel (there is not much avgas in the middle of a tundra) to medical support, and funding.

The performers traveling with the Tour form another spectacular team. I feel privileged to perform again with the Granley Family, Bud and Ross. Ken Fowler and Eric Hansen from Team Rocket, Dave and Drew Watson from Yellow Thunder, Brent Handy and Stefan Trischuk are among those who responded to the challenge. Some performers are only able to commit to a part of the Tour. Some,like your faithful Sky Dancer, would not want to miss a single day of it.

Where and when? The Tour takes off on 1 June from Rocky Mountain House, Alberta, and will head north for its long journey across the Yukon, Northwest Territories, Nunavut, Northern Quebec and Labrador. We will celebrate Canada Day, July 1, in the geographical centre of Canada–Baker Lake, NT. One of the most notable aspects is the tour will journey as far north as Alert, NU, the most northern permanently inhabited place in the world, only 400 nautical miles from the North Pole! This tourwill set a world record for the longest series of air shows North of 60.  The final show of the Tour will be on18 Augustin Nunavut’s capital, Iqaluit, after which I am sure everyone will be sad to see this great summer adventure come to an end.

The team knows the reality will be harder and less perfect than the plan. We will fight the weather, have cancellations and technical issues. I was even asked if I would have a gun for polar bear defense. Oh my! I do hope to see muskox (I promise to share pictures!) and find a nice pair of mukluks, even though they are too warm for my home in Vancouver.

One question I am asked frequently is, “how can someone join the Tour?” The answer is–in a VERY limited way. Some of our more southern locations like Yellowknife, are reachable by most general aviation planes within a reasonable amount of time and fuel availability (expect to pay a premium for the avgas up North). You should still check with your instructor or more experienced pilots before setting off on such a trip. Often your nearest alternate airport is beyond your fuel range, and survival in case of an engine failure is difficult. Mountain flying and weather are other challenges in many Northern regions. Most locations in the High Arctic don’t even have avgas available. The Canadian Arctic Aviation Tour, benefitting from military support, will have fuel for performers flown in ahead of time. But these supplies will not be available for the public.

The most important question though is “how can I support the tour?” and that answer is simple – buy a mile! As one can imagine this project comes at a significat cost and in order to pull this off we need the support of everyone. Please help us to make this a success by buying a mile on our crowdfunding page: crowdrise.com/caat2017.